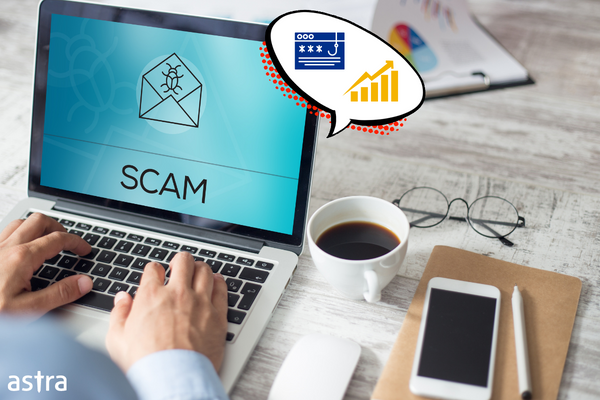 The advent of the cyber world came with its own risks in the form of cyber-attacks carried out by hackers with malicious intent. According to IBM, phishing was one of the top attack vectors in cybercrime at 16%.

Phishing attacks are a form of social engineering designed to retrieve data from unsuspecting users through the impersonation of reputable websites and authorities to whom victims might reveal information. This article will give a detailed insight into the phishing attack statistics 2023 for you to gain a better understanding. Let’s dive in!

Here are the top most intriguing phishing statistics you should be aware of in 2023.

In 2018 it was estimated that by 2022 a ransomware or phishing attack will occur every 11 seconds. This section will feature the latest phishing attack statistics 2023 based on the frequency of occurrence, the cost of such breaches, and pandemic-related increases.

Phishing scams account for nearly 22 percent of all data breaches that occur thus securing it a position as one of the most prevalent cybercrimes in the FBI’s 2021 IC3 Report. It was also reported that in 2021 nearly 83% of companies experienced phishing attacks.

The cost of phishing attacks on companies has significantly risen through the years, with the $100 million loss faced by Facebook and Google in 2017 perhaps being one of the most infamous examples. Other such instances include:

The rampage of COVID-19 saw a shift of many offline communities to online platforms. This in turn gave a larger diaspora for phishing attacks to take place which can be pinpointed through specific episodes:

Industries Commonly Targeted and Their Impact

It is always assumed that technology-related businesses will always have an impeccable security system in place that helps prevent phishing and other scams. However, resource allocation for tech companies can vary severely depending on their goals thus at times affecting the effectiveness of the security solutions implemented by them. Hence it is always important for tech companies to ensure that their staff and company data are protected with the highest priority.

One of the prime targets of phishing scams, the threats faced by healthcare have significantly increased during the pandemic. Private patient information is some of the most valuable information stored that can be used to commit identity theft, insurance fraud, and more. Since healthcare is one of the oldest fields that has been collecting patient health information even before the advent of digitalization, the transition from paper storage to digital can pave the way for its own security risks.

Rather than targeting big well-established and known companies prone to have high-end security facilities, scammers nowadays find small and medium-sized enterprises to be much easier targets. This is mainly because such companies will have comparatively lesser security measures in place to thwart such attacks effectively thereby making themselves appetizing targets. Such upcoming companies may not have their cybersecurity roles filled or might not have the resources to fully place effective security measures.

Yet another hub of personal data storage, the educational sector is a prime target for phishing and scams. From addresses to passwords and identification documents, they are all stored by nearly every educational institution. However, it is important to understand that sensitive information isn’t restricted to student and faculty information alone, rather can also include sensitive information from research institutes as well. Thus making phishing scams more highly prevalent in this sector.

The onset of the pandemic saw a slew of phishing attacks aimed at innocents through fake claims of donations and or payments as well as financial support pages all places for accessing sensitive information from users and stealing money.

The war in Ukraine has been a major scope for scammers and other malicious attackers to take advantage of through donation and fundraising scams. Using subject lines such as “ Help save children from Ukraine” are used to target victims via emails. Not only money but cryptocurrency, as well as information, is also stolen as part of this trend.

A general phishing campaign involves a website you’ve never visited or used before. This makes it much easier to recognize. However, with a spear-phishing campaign, the emails received aren’t generalized like these, rather they are targeted to your needs or look like they are from websites you’ve visited before thus making it much more difficult to identify them as phishing scams until it’s too late.

Popular file extensions like .pdf, .html, and .htm along with Google, and Adobe were made for phishing schemes. The latter is known as credential phishing, where sign-in data is stolen from users.

Recent trends have also seen an increase in phishing attacks aimed at online communication platforms like Zoom, Slack, Microsoft Teams, and more. Another trend is attacking through social media platforms such as  Instagram and more through strangers’ messages leading to account takeover by malicious attackers.

How To Prevent Phishing Attacks?

Enabling two or multi-Factor Authentication can drastically help reduce and avoid falling prey to phishing attacks. This is because the data obtained through phishing if successful becomes redundant due to the further authentication steps in place.

Opting for a well-established and experienced cyber security software can help in the detection and blocking of such phishing attempts thereby keeping the company and its data secure.

Giving company employees regular training on secure data handling practices, tips to look out for in recognizing phishing emails, having a top-notch security system in place for their devices, and other similar measures can drastically reduce the chances of being a victim of a phishing scheme.

Always be cautious about e-mails received. Check for spelling mistakes, immediate requirement subject lines, company details, whether an email has previously been received from the same address, is it trustworthy, these are some of the questions and points that one should take note of when checking emails that look suspicious.

With the cybersecurity landscape changing ever so constantly, knowing the figures and facts related to it, and its risks like phishing and other scams can give a deep insight. This article has focused mainly on the phishing attack statistics of 2023, the major sectors that fall victim to it, and the latest trends in phishing.