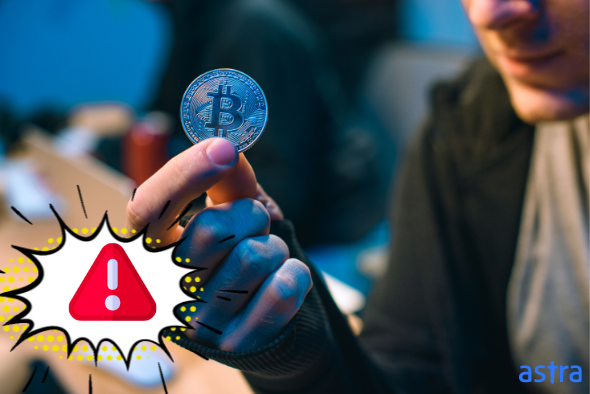 When Bitcoin was launched around 2008 by the pseudonymous Satoshi Nakamoto, blockchain technology became a major driver of the cryptocurrency industry.  Fast forward to today and thousands of cryptocurrency coins are available in the market. Price volatility, however, continues to be a characteristic feature of all cryptocurrencies. As decentralized cryptocurrencies fight to find ways to avoid government restrictions and become digital legal tenders, there are security concerns remaining surrounding their transactions. Here’s a discussion on the security risks attached to cryptocurrencies.

This Blog Includes show
Vulnerability of Wallets
Cyber-Attacks on Cryptocurrency Exchanges
Unfortunate Events (Self-Imposed Attacks)
How to Protect Yourself Against Cryptocurrency Losses
Use Hardware Wallets
Be Abreast of the Cryptocurrency Systems
Was this post helpful?

Hackers and other cyber-criminals pose real threats to the security of cryptocurrency wallets. In one research study conducted by Edinburgh University researchers, they discovered some security flaws in cryptocurrency hard wallets. Criminals can exploit this vulnerability to steal millions in crypto-assets. Even more shocking was the researchers’ admission that the vulnerabilities were equally applicable to the so-called advanced wallets with high-end encryption.

In the study, the researchers used malware to compromise the communication links between the hardware wallets and the users’ computers. When this security breach is not detected, cryptocurrency investors can easily lose their funds since it’s easy for hackers to divert their coins to different wallets.

The issue of crypto exchanges suffering attacks from hackers is not a new story. In fact, it has already happened many times. In some incidents, successful attacks on exchanges led to a significant fall in the value of Bitcoin — the world’s leading cryptocurrency. Although past exchange attacks didn’t burst the bubble completely, there are deep fears that future attacks may reduce the value of Bitcoin and other cryptocurrencies to nothing.

While an attack on the digital ledger (blockchain) may seem unrealistic for now, some hackers have already made fortunes by stealing hundreds of thousands of bitcoins. Around 2014 or so, there were reports that hackers had been trying to break into Bitcoin exchanges for years. When they eventually hit the jackpot on the Mt. Gox exchange, the hackers walked away with 850k bitcoins. That whopping amount now converts to over $7 billion US dollars adjusted to inflation.

It was virtually impossible for Mt. Gox to recover from these huge losses. So, they went bankrupt. However, Mt Gox is not alone. Other crypto exchanges such as Bitfinex are also on the radar of hackers. Bitcoin has also been a victim of DDoS attacks, also known as Distributed Denial of Service. One Imperva report suggested that BTC exchanges, in particular, are the main targets of DDoS attacks. Since Bitfinex is a popular BTC exchange, the company has repeatedly experienced DDoS attacks since 2017.

The idea of keeping bitcoins for the long term can sometimes result in losses due to unfortunate circumstances. Even though it’s technically difficult for crypto coins in the blockchain to be attacked; when you take charge of your cryptocurrency funds, you keep them at your own risk. Once you lose your private keys, your funds will be lost forever. Assuming you use offline wallets to store your crypto-assets, when a natural disaster such as an earthquake or a flood strikes — you will probably be left with no way to access your hard-earned cryptocurrencies. And that’s the main disadvantage of paper and hardware wallets.

Many a time, investors lose their crypto assets because of negligence or poor management of their private keys. Anyway, that’s understandable. If people are bad at remembering 9-character passwords, how much more about a 48-character string of ciphertext? In the United Kingdom, one James Howell had a shock of his life when he mistakenly disposed of his hard drive containing 7500 bitcoins. James had mined this large number of bitcoins during the early days of the bitcoin revolution. By losing 7500 BTC, his single mistake cost him $60 million. A rather unfortunate event to say the least.

Even though no hacker had targeted James, his own bad management of his keys made him a cheap victim of his own negligence. The topic of key management is one that often troubles geeks in the crypto industry. Imagine how difficult it is for ordinary people who lack a real understanding of blockchain technology. By its very nature, the blockchain is immutable (unchangeable). Unfortunately, that means lost private keys are irrecoverable since there’s no way to reverse a transaction once it’s made.

According to Chainalysis, around 17–23% of all available bitcoins have gone missing forever. Almost all the losses occurred due to people misplacing their private keys. The Ethereum blockchain is known to harbor at least $4.5 billion worth of Ether. This is as a result of the unfortunate circumstances that the recipients of the Ether airdrops failed to manage their private keys properly.

How to Protect Yourself Against Cryptocurrency Losses

Despite the threat of cyber-criminals to the cryptocurrency industry, there are things you can employ to protect your accounts and minimize your risks of suffering losses. Some investors ended up becoming big-time millionaires. You could also be the next hero of this disruptive technology. Here are a few tips on how to secure your crypto assets.

Know that security always begins with you, the account holder of the cryptocurrency. Your private key is the gateway to your funds. To enjoy the fruits of your labor, protecting your keys is absolutely vital. If you want to lock your funds away from hackers, save them offline in a hardware wallet such as the Ledge0r. In order to access your funds and perform transactions, you need to connect your USB wallet to your PC. But be sure to make duplicate copies of your wallet and store them in safe deposit boxes.

Be Abreast of the Cryptocurrency Systems

It takes knowledge and experience to be an expert in cryptocurrency security. To beat hostile actors, you need to familiarize yourself with the ins and outs of the fast-rising cryptocurrency system. For websites dealing in cryptocurrency, a third-party security extension like Astra can work wonders in protecting your website and cryptocurrency. If you’re a newbie, start with small investments in a security solution and learn about the security issues as you go.

In conclusion, cryptocurrencies have opened a new chapter for digital currencies. However, there are serious security flaws related to the industry, and these should not be ignored.