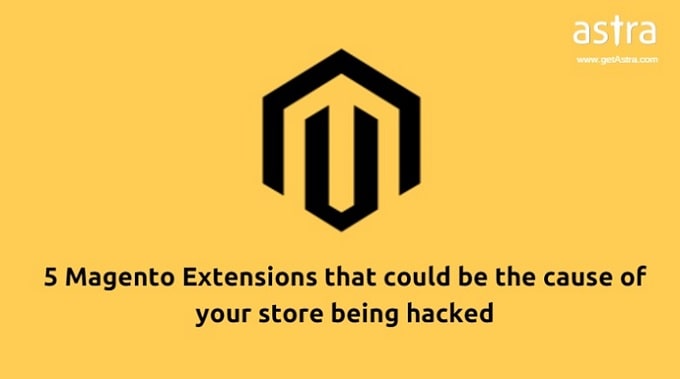 When it comes to empowering retailers and brands, Magento is one of the most widely used e-commerce platforms. However, with great power comes greater responsibility of adhering to security practices for safe e-commerce businesses. On the contrary, Magento is one of the highest targeted e-commerce platforms for credit card fraud and user credential theft, with a staggering 62% of stores containing atleast one security flaw.

Magento security should be top priority for store owners, but such is not the case. While a large number of store owners fail to timely update to the latest versions with updated security patches, majority of them overlook the importance of installing a security patch altogether. Consequently, Magento’s security practices have been in news notoriously for obvious reasons, with stores getting hacked with the aid of newer techniques now and then.

Listed below are some of the vulnerable Magento extensions which may have rendered your online store prone to cyber-crime in the past:

The PDF invoice extension is a widely used extension by hundreds of Magento stores to generate invoices for customers. These usually comprise end customer addresses and sometimes even their personal information. The vulnerable extension posed a threat to user privacy hinting at loss of end user data via leakage of any user’s invoice using Google dorks. The issue came to light while our w security team was performing a security audit on one of Magento’s customer store.

On performing a regular search via a google dork inurl:pdfinvoiceplus/, all websites using PDF invoice plus popped up

A cross site scripting (XSS) vulnerability came to light in the Magento Affiliate Plus extension rendering more than 7000+ stores vulnerable to end user data/account information compromise, credential loss and exposed internal directory structure. XSS being one of the most widely occurring vulnerability brings with itself some critical consequences, the prominent one being loss of admin data if targeted.

A patch to curb this vulnerability was released, but unfortunately, many sites did not update immediately. Assessing the importance of the fix, hackers found an opportunity to create a legitimate looking yet fake patch containing malware. This in turn would steal databases of essential user payment credentials

The fake SUPEE-5344 patch was rather a sophisticated one with nearly 160 lines of code (Image courtesy: Sucuri)

To avoid being a victim to such an attack required Magento users re-evaluate credentials and obtain a security update from the respective companies the extensions were bought from. Going through the exhaustive list of Magento Security Best practices can go a long way in ensuring protection against any such vulnerabilities in the future

The Amasty RMA extension vulnerability allows a hacker to upload malicious files on the Magento server. Moreover,  RMA allows a hacker to download any directory and critical files from the server. Consequences would range from a severe server compromise to a targeted attack on user/admin.

During a security audit with a Magento user, Astra’s team busted the vulnerability by attempting to upload a php shell

The immediate fix for safeguarding your website from this vulnerability is to switch to version 1.3.11

[…] and a huge community of developers. As the technology and security measures improve, so do the capabilities of the hackers. Hackers usually target e-commerce websites to gain credit card information or just for some kicks. […]