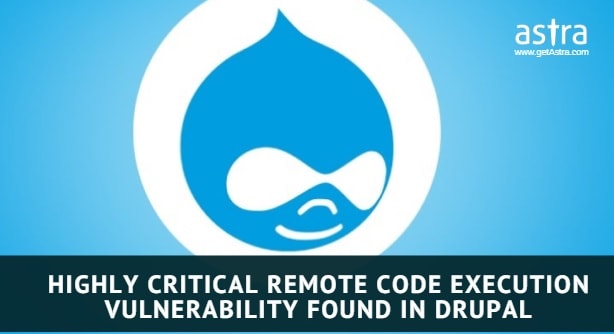 Occupying a significant market share in Content Management Systems (CMS) used to develop websites, after WordPress and Joomla, Drupal is a highly sought after CMS by major businesses and government organizations including the White House. Drupal is arguably the most secure CMS as it strictly adheres to online software standards (OWASP). While Drupal has gained prominence with the developers, it embodies an active community proactive about security and is designed for the more tech-savvy users and has the ability to cater to complex projects.

Drupal proudly boasts of a CMS that has encountered the least number of vulnerabilities and managed to keep attackers at bay. However, attackers constantly invent new ways to circumvent security measures, with Drupal being no exception. Like any other CMS, Drupal has been at the center of notoriety a few times due to some impending vulnerabilities in it.  A recent drupal vulnerability which came to light is claimed to be a Highly Critical Remote Code Execution Vulnerability found in Drupal.

What is the Remote Code Execution Vulnerability?

Remote Code Execution is a method through which an attacker is able to execute a malicious code and overtake control of the affected system with the privileges of the user running the application. No matter where the device is geographically located, the attacker gains access to someone else’s device and manipulates information according to his will.

One of the most commonly occurring yet high severity vulnerability, many WordPress or other CMS websites have been vulnerable to remote code injection attacks in the past. The flaw generally is introduced by third-party plugins and can be fixed using security patches.

Consequences of the Remote Code Execution Vulnerability in Drupal

Termed as a highly critical security risk, the Remote Code Execution vulnerability (CVE-2018-7600) in multiple subsystems of Drupal could pave way for an unauthenticated, remote attacker to execute arbitrary code on a targeted system. To exploit the vulnerability, the attacker sends malicious input in form of an arbitrary code into the affected application on the target system. This drupal vulnerability could result in a complete compromise of the affected site.

The affected versions include

How to Fix this Drupal Vulnerability?

The usual safeguards to combat this drupal vulnerability include applying the appropriate updates, allowance to only trusted users to have network access and regular monitoring of affected systems. Drupal.org has highly recommended installing the following software updates:

Worried about securing your Drupal Site from impending online threats? Get hold of Astra’s Drupal Security package to assure safety while you do business.

To keep updated with latest security patches for Drupal and other mitigation techniques, follow our blog on Drupal Security.