What do Hackers do with Hacked Websites? 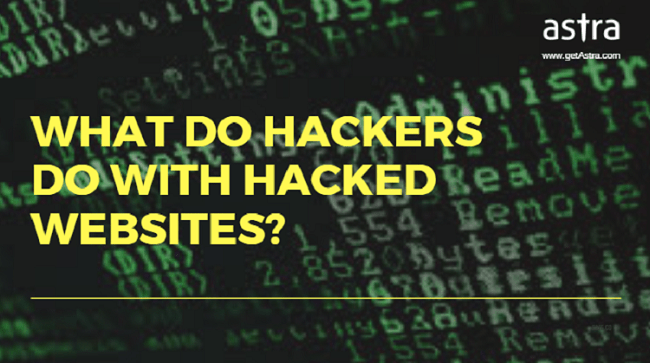 2017 was the year of hackers. From content management systems, e-commerce portals, data breaches to hacked websites of financial institutions, cybercrime is on the rise with every passing year. 2017 witnessed staggering cyber attacks like the massive financial data theft in the Equifax Data Breach,  the WannaCry Cyber Attack which was 2017’s deadliest ransomware attack, the Petya Ransomware attack, and the notorious yahoo data breach to name among a few.

This Blog Includes show
How Are Websites generally hacked?
What hackers can do with hacked websites
Form a Stolen Data Inventory
Sell information
Filter out the good stuff
Sell the cards
Bulk Sale
Was this post helpful?

How Are Websites generally hacked?

Google recently noted that it had seen a 32% rise in the number of hacked websites. The most common ways websites get hacked are:

What hackers can do with hacked websites

But once information is compromised, what can a hacker potentially do with this data? While there are many speculations about this, getting into an attacker’s shoes to understand his post-hack actions can help you minimize damage from potential future cyber attacks.

A hacker’s post-breach checklist is likely to contain the following actions:

The gift card, in turn, is used to purchase high-value goods such as electronics, making it difficult for companies to trace. By the time the company figures out the fraud and the cards are blocked, the criminal is in possession of the purchased goods. These packages are usually then shipped via a re-shipping scam. Using legitimate channels such as Craigslist job listings, unsuspecting individuals are recruited as Mules (re-shippers). The goods are then usually shipped outside the country, or directly to someone who purchases the goods from an auction site the fraudster has posted the goods to.

Also, check our video on Simple WordPress Security Tips to Follow in 2018.

Download our Secure Coding Practices Checklist for Developers to reduce the chances of getting hacked.