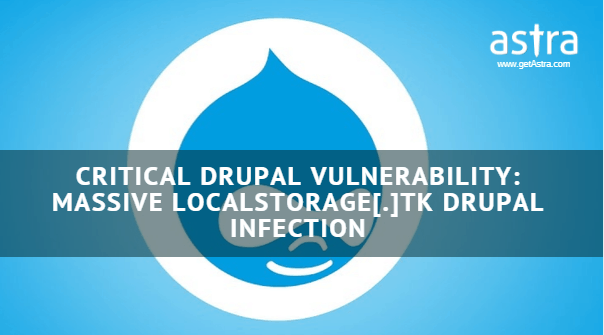 The spring of 2018 has witnessed a surprising rise in the number of infections stemming from Drupal vulnerability. Once deemed as one of the most secure CMS among its counterparts: WordPress and Joomla, and catering to a number of businesses worldwide, Drupal has recently been subject to yet another malicious attack.

Drupal users are currently tackling a massive surge in infections with the latest being a local storage [.tk] attack.  The infection has affected thousands of Drupal websites by redirecting users to “Tech Support” scam via “js.localstorage[.]tk”

Eliminating these malicious JavaScript codes from files and the database may be futile, as hackers have created files to reinfect the files in case they are suspected clean. These files are generally seen to contain random filenames like “g.php”, “tonure.php”, or “jooner.php”.

Following is the malware injector code which injects the malicious Javascript file into .tpl.php, .html.twig, header.php, and drupal.js files.

Some common symptoms of the Massive localstorage[.]tk Drupal Infection includes:

Looking for watertight security for your Drupal Site against such online attacks? Apply for Astra’s Drupal Securit Suite to assure security while you do business.

For immediate help, drop us a message on the chat widget.